The Method to My Madness 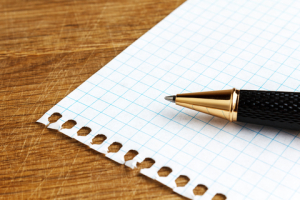 I admit, the title is a bit misleading. This isn’t so much a post about what’s involved in my writing process; it’s more the story of my ongoing quest to find one.

I’ve always been a seat-of-my-pants writer. (For those of you unfamiliar with the term, that’s a writer who grabs a pen, or a keyboard, and just starts writing. No outlines, no plans—just a desire to get the story down.) In hindsight, it makes sense that I would approach writing this way. For most of my life, writing was a hobby. I would write a novel, slap it in a ring binder, and move on to the next one. I never bothered to edit, and I certainly didn’t share my stories with anyone. I wrote for me, and only me. End of story.

All that changed when I wrote The Final Formula. It was better than anything I’d written before, and suddenly I wanted to share. I joined a workshop, learned to edit, and um, three years later, I published it. (Yeah, I was a big chicken.) During those three years, I wrote more in the Final Formula universe, and those stories became the next three titles in the series.

With the release of The Necromancer’s Betrayal, it was time to move into uncharted waters. I had to write the next book with no pre-written stuff from years past. I found that daunting at first. There are actually people waiting for the next installment. I didn’t have time to screw around with the seat-of-my-pants writing style I had previously employed. I had to learn to plan ahead, to (gasp) outline.

I’ve never been opposed to outlining. I don’t believe it cramps creativity or anything like that. I would LOVE to have a road map as I work my way through the writing of a novel. So over the first few weeks of August (when not winging my way through the early chapters of FF3), I read a number of books on outlining/plotting. I scribbled and fought, and finally I did it. I wrote a plot outline!

My outline is nothing fancy. Just a sheet of notebook paper with a line or two per scene, grouped into chapters. I know my outline isn’t perfect—I had to overhaul the thing about a third of the way into writing the novel—but it’s a start. Like every skill, it’ll take practice before I’m proficient at it. 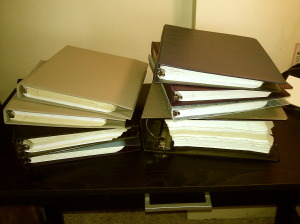 When writing was just a hobby: ten unedited novels.

Another technique I’ve begun to employ is pre-writing. Before each writing session, I pull out my 9.5 x 6 inch spiral notebook and map out the nitty-gritty of what I want to write in that session. Sometimes it’s just a few notes on the next scene. Other times, it’s a plan for an entire chapter. My notes aren’t terribly detailed. I like to leave room to explore, though I will include snippets of dialogue. I love writing dialogue and it always opens up the story and lets me see what’s really happening.

Maybe all of this seems like a lot of work before I even start writing the story, but I believe it will help tremendously in the long run. Granted, it took me two weeks to nail down the outline, but I’m super excited about the results. My daily word count has improved, and I’m hopeful of meeting my goal of releasing FF3 this December.

Now I better get back to work…