A steampunk fantasy where solutions aren’t always black and white—sometimes they come in shades of iron gray.

Captain Bridget “Briar” Rose wants for nothing. Each day is a new adventure, living the life she loves, running cargo on the Ohio & Erie Canal. That is, until her cousin decides to sell the family boat to finance a new business venture. He wants to build locomotives for the railroad—the very industry that could put the entire canal system out of business.

Not one to give up without a fight, Briar does a little snooping into her cousin’s new business partner. When she gets a sneak peek at the locomotive plans, she suspects that the man is either a genius, or a ferromancer—one of the dreaded metal mages of Europe’s industrial revolution.

Determined to reveal her suspicions, Briar takes the plans and heads for the newspaper office in Columbus, stealing the family boat in the process. Kidnapping her cousin’s handsome business partner wasn’t part of the plan, but when he shows up, demanding the return of his property, she can’t let him go. After all, if Briar can prove that the railroad is using ferromancy, she could save more than her boat. She could save her way of life.

Captain Bridget “Briar” Rose only wanted to stop the railroad’s expansion and save the canal life she loves. She didn’t intend to make herself and her crew outlaws, or stumble into a magical world she knew nothing about. And she certainly didn’t mean to damn a man, but that’s exactly what she did to Grayson, a brilliant railroad engineer who turned out to be much more than he seemed.

To set matters straight, Briar is on her way to Cleveland to meet with a woman who may be able to help Grayson. But getting there won’t be easy. Wanted posters are everywhere, an old…friend is stalking Grayson, and he’s attracted the attention of the Scourge—the executioners of the ferromancer world.

If she’s to keep Grayson safe, Briar must pretend to be his keeper. Which won’t be easy. Not when she knows so little about his world and her own newly discovered magic. Can she fool those who know that world so well? Or will Grayson pay the price for her failure?

Read an except here: Soul Singer

Captain Briar Rose has eluded the law, outwitted the soulless, and defeated a fully devolved ferromancer. Now she faces her biggest challenge yet. She must convince Esme, one of the females of the ferromancer race, to teach her how to use her own ferra magic. But nothing in the ferromancer world ever goes as Briar plans, and dealing with Esme is no exception.

Briar anticipated the woman’s arrogance and condescension, but she didn’t expect a lab full of macabre samples. It seems Grayson had left out a few details about Esme’s past, and the more Briar learns, the more she wants to punch the woman. But fisticuffs—warranted or not—aren’t an option. Not when Esme is her lone hope for finding some answers.

It won’t be easy, but Briar must find a way to make this partnership work. Otherwise, she will never master her unique talent, or use it to save Grayson from his fate.

Captain Briar Rose is on a deadline. She has one week to deliver Grayson to Solon, the ferromancer behind so many of her problems. If she doesn’t arrive in time, Solon has promised to destroy her hometown. She’ll have to push hard to meet his arbitrary deadline, but it should be possible—if her cousin Andrew doesn’t get in the way.

Andrew has been Briar’s nemesis since they were children, but now that he’s working for Solon, Andrew has become an even bigger problem. His insistence on meeting at every toll office is a hinderance, especially when her boat becomes a target for sabotage. Briar doesn’t have time for a pretentious cousin or a damaged boat, but her troubles don’t stop there.

The clock is ticking for Grayson as well. His devolvement is accelerating at an alarming rate and nothing they try seems to slow it. As Grayson struggles to remain the man he is, Briar begins to believe that time is her true enemy. Perhaps Solon’s deadline wasn’t so arbitrary after all.

Captain Briar Rose has traveled from one end of the Ohio and Erie Canal to the other, searching for answers. Some she found, while others remain frustratingly elusive, but she doesn’t have time to continue the search.

Ferromancers are gathering in her hometown, anxious to hear her response to Solon’s ultimatum: use Grayson to cure their ailing race, or see her hometown destroyed. They won’t be happy when she refuses to sacrifice Grayson, but curing them isn’t the only way to stop them.

Though her magic seems ferra, Briar’s ability hails from the Scourge, the executioners of the ferromancer world. Should she join their ranks and put that ability to use? Her uncle Liam thinks so—as do the dozens of Scourge he’s gathered. They want her to lead them into battle.

With no easy choices, Briar is left with one hope: Grayson. Legends claim that together, their unique talents can save his race, but so far, their experiments have ended in failure. With time running out, and a new threat complicating an already complicated situation, Briar must make her choice. Will she be the savior of the ferromancer race, or the harbinger of its destruction? 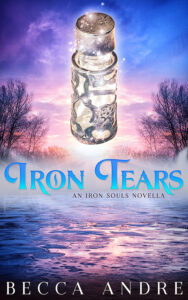 After her mother’s tragic death, Kali finds herself alone in the world—until a newspaper article accuses her mother of witchcraft. Now Kali can’t even drown her sorrows at the tavern without attracting the attention of local bullies, as well as an enigmatic stranger who comes to her aid.

Perseus has no trouble stopping the bar fight—much to Kali’s annoyance at being denied a good brawl. But when he insists that she is only half human, like him, she decides it is best that they part ways.

But avoiding her new acquaintance isn’t as easy as she hoped. Not when she is confronted by the cloaked man Perseus is hunting. When the man recognizes her mother’s filigree-covered tear catcher, Kali sees in him a possible link to the past and answers to her own mysterious ancestry. If Perseus doesn’t kill him first.

(Originally published in the multi-author anthology, Caught in Crystal.)