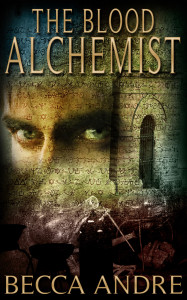 As I mentioned in a previous post, I will be interviewing a character from my Final Formula series here on my website. I found it difficult to select a character (I love them all), so I asked fans to make the selection for me. After a  tense round of voting (here and on my Facebook page), a winner was named, and questions solicited.  Thanks to everyone who participated!  I hope you enjoy the following interview.

Now, without further ado, I give you Ian Mallory, undead necromancer, alchemist, and smartass…

Perhaps he didn’t care for the introduction…

(footsteps echo in the hall, and a moment later he steps into the room)

Ian: I’m here. (his cheeks dimple with a smile)

Becca: You found the mirror in the foyer, didn’t you?

Ian: (straightens his sleeve) Why do you ask?

Becca: No reason. Please have a seat and we’ll get started.

Ian: (smoothes his coat before settling into a chair) So, it’s true? Your fans selected me for your first interview?

Becca: This isn’t going to go to your head, is it?

Ian: Of course not. I’m humbled to be chosen.

Ian: When it suits me.

Becca: (tries not to laugh because it only encourages him) I commend you for your honesty—which is what your fans expect today.

Ian: I won’t betray their trust.

Becca: (studies him a moment) Okay. Let’s jump to our first question… Kendra would like to know a little more about your tailor.

Ian: Naturally. Though, in this modern age, he is more a purveyor of garments rather than a creator. But the man is skilled with a needle when he can’t find what I’m looking for. I would judge him to be as talented as his ancestor.

Becca: You knew his ancestor?

Ian: Ironically—or not—he is the descendant of the tailor I used to frequent when I was alive.

Becca: How is that not ironic?

Ian: Addie suggested that there is a magical connection.

Becca: You don’t think so?

Ian: Addie sees magic in everything. Myself, I believe that it is simply a matter of the family business being passed down through the generations. Although, the current owner has a knack for locating exactly what I’m looking for.

Becca: (eyes his waistcoat and old fashioned cravat) Magical talent indeed. Speaking of your transition to the modern world… Kantami would like to know if you listen to modern music.

Ian: Do you mean that dreadful noise Elysia and James are so fond of? No.

Ian: I was not what you would call an enthusiast, but Isabelle was. I did enjoy listening to her play the pianoforte.

Becca: You speak of her so infrequently that I hesitate to ask, but would you mind telling us a little more about her? Kelly would like to know where you and Isabelle met.

Ian: Baltimore, Maryland. At the home of her great uncle. I had been apprenticed to him, and she was his ward.

Becca: Apprenticed? In a trade or—

Ian: Officially, it was in necromancy. He shared my blood gift so it was a logical arrangement, though he taught me far more about alchemy.

Becca: You’ve spoken of your alchemy tutor a few times, but I don’t think you’ve ever mentioned that it was Isabelle’s great uncle. How old were you?

Becca: What did you think of Isabelle when you first met? Love at first sight?

Ian: For me. She took a little more convincing.

Becca: I sense a story here.

Ian: And I sense that these questions are no longer the fans’.

Becca: Fine. You can tell me about it later. (makes note) Next question. Jessica would like to know what potion is your favorite to brew and why.

Ian: The Final Formula, of course. After all, it is the formula that has been sought by alchemists throughout time. If only I had known it back when… (a long pause before he clears his throat) Addie has given me a whole new outlook on alchemy.

Becca: Which brings me to Maria H’s question. What are your thoughts and feelings on Addie?

Ian: She is a brilliant alchemist.

Becca: That’s it? Certainly you can elaborate a bit more. The two of you are so close. Carmen asks: What is the nature of your feeling for Addie?

Ian: I have nothing but the highest respect for her. She…inspires me to be more. To be better. Not unlike Isabelle used to.

Becca: Are you saying that Addie reminds you of Isabelle?

Ian: In a way. I think because, like Isabelle, Addie took the trouble to look beyond my reputation and my appearance to see the man beneath.

Becca: No other resemblances between them?

Ian: They both have dark hair and strong personalities. (tugs at his sleeve) Any other questions?

Becca: (smiles) A few more. Maria M. asks: If Addie’s power depended on your faith in her instead of her own, would she always come out on top?

Ian: (chuckles) In other words, do I believe in her more than she believes in herself?

Becca: I think you could interpret it that way.

Ian: Addie has a confidence in her ability like I’ve never seen. She truly believes she can do the impossible. Even so, I still want to answer in the affirmative. I absolutely believe that given enough time and resources, Addie’s alchemical ability knows no limit.

Becca: Nice. Okay, last question. Since we met you, you’ve made it clear that you have one goal, and that’s to find your daughter, Matilda. Jessica wants to know what you will do if you fail.

Becca: Yes, but what if?

Ian: Lex is back in the world. I’m sure I can persuade him to tell me.

Becca: Your twin brother, Alexander? What will you do when you find him?

Becca: Just like that? There’s nothing you have to say to him?

Ian: I think everything has been said.

Becca: Do you think his…death will bring you some closure?

Ian: Perhaps, but contrary to what you must think, it will bring me no joy.

Becca: What about all the evil he’s done to you?

Ian: Lex is insane. I should have done something long before things got so out of hand, but…

Becca: He is your brother.

Ian: I’ve never been closer to anyone than I was to him. Once. (rubs his face before looking up) It must be done. I won’t hesitate this time.

Ian: There are a lot of things I would do differently if I got another chance. (frowns) And you are asking your own questions again.

Becca: (sighs) You’re a hard man to make talk when you don’t want to. (glances over question list) Well, I think we’re done here. Thanks for agreeing to this interview.

Ian: (smiles) Anything for my fans. Have you told Rowan that I won?

Ian: Why not? He’s a gracious man. I’m sure he would congratulate me.

Becca: You should be grateful he’s such a gracious man. If he ashes you, even I can’t bring you back.

Ian: It could all be a bad dream or—

Becca: And you do?