The great thing about writing fiction is that I get to do things, go places, and own things that I will probably never do, go, or own. One of the things I have the most fun with is picking out cars for my characters to drive. Sometimes, the character’s personality or circumstances dictates the car, but when I get to choose, I lean toward my love of the old American muscle cars.

I come by my love of those old cars honestly: I get it from my dad. He used to take me to car shows when I was a kid. He would know the make and model of every car in the place. I got pretty decent at naming a lot of those old cars myself, but never as good as Dad. Even now, if we see an old car on the road and none of us can name it, my son points out that Grandad would know. (Now that Dad has a smartphone, I just text him a picture and ask.) 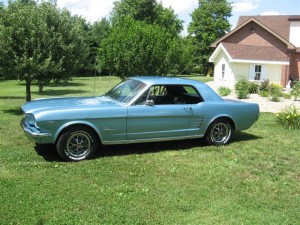 The Mustang after restoration number two.

My first car was a 1966 Ford Mustang. I had been wanting one for a while when Dad found one in Columbus (two hours away) that was in good shape and mostly road worthy. Not a bad find considering that the car was almost twenty-five years old at the time. We brought it home and Dad worked on it for a month replacing the entire braking system until he felt it was safe enough to drive. I was so excited when he finally gave me the keys. I could’t wait to drive it around town.

The second day I had it out, I wrapped it around a tree.

Those were the days before cell phones, and as luck would have it, my mom was at my sister’s ballgame, my boyfriend (now husband) was out of town, and Dad was working at a new house that didn’t have a phone installed. I had to have my best friend’s mom drive me to him. That was the longest ride of my life. When I told Dad, he just looked at me and said, “You didn’t.” And that was the end of it. He probably knew that nothing he could say would make me feel worse than I already did. So Dad fixed the car, and the fence I knocked down to get to the tree…heck, he even fixed the tree (he wrapped the debarked trunk in tar paper and it survived). 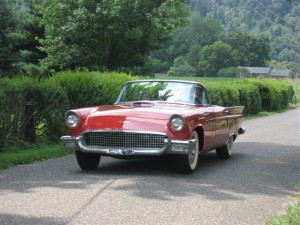 Back on the road…almost sixty years later.

Dad’s retired now and spends his time tinkering on old cars because he wants to—not because one of his kids wreaked their car. Dad always wanted a ’57 T-bird, so that was his first project. He bought one, stripped it down to the frame and rebuilt it. When he finished that project, he wheeled my old Mustang out of the garage and did the same with it. He told my son he could have the Mustang when he’s older. (I suggested when he’s thirty, though I might relent and let him drive it to prom. Maybe.)

So when you see a muscle car in one of my stories, you know where I’m coming from. Okay, the ones in my stories are the modern version of some of those old cars I admired (I love the throwback styling a lot of the new cars are sporting), but the sentiment is the same. One of these days I’m going to get me a Camaro like Rowan’s. Well, I might not go for the flames. It would be tough for Dad to fix those if I should hit another tree. 😛 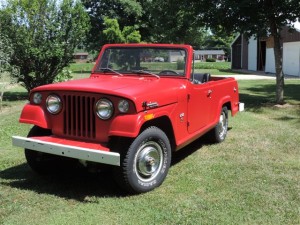